Louis Daguerre, was a French painter and physicist who invented the first practical process of photography, known as the daguerreotype. The first permanent photograph from nature was made in 1826/27 by Nicéphore Niépce but it was of poor quality and required eight hours exposure time. Niépce partnered with Daguerre in his research but died before Daguerre developed his process which required only 20 to 30 minutes.

Louis Daguerre called his invention "daguerreotype." His method, which he disclosed to the public late in the summer of 1839, consisted of treating silver-plated copper sheets with iodine to make them sensitive to light, then exposing them in a camera and "developing" the images with warm mercury vapor. The fumes from the mercury vapor combined with the silver to produce an image. The plate was washed with a saline solution to prevent further exposure.

Daguerreotypes offered clarity and a sense of realism that no other painting had been able to capture before. By mid-1850's, millions of daguerreotypes had been made to document almost every aspect of life and death. Photography was on its way to becoming commonplace. 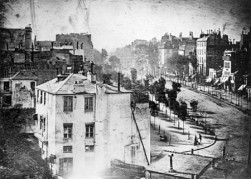 View of the Boulevard du Temple, taken by Daguerre in 1838 in Paris, includes the earliest known photograph of a person. The image shows a busy street, but because the exposure had to continue for several minutes the moving traffic is not visible. At the lower right, however, a man apparently having his boots polished, and the bootblack polishing them, were motionless enough for their images to be captured. There is also what appears to be a young girl looking out of a window at the camera. 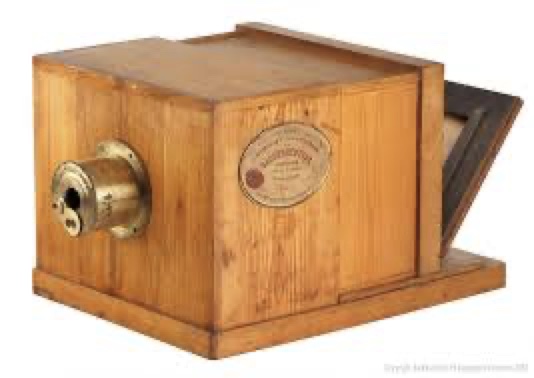